In Memory of
Thomas A.
Pierce
1940 - 2018
Click above to light a memorial candle.
Memorial Candle Tribute From
Philbin-Comeau Funeral Home
"We are honored to provide this Book of Memories to the family."
View full message >>>
Send Flowers
Plant a Tree In Memory of Your Loved One
Click Here
Menu

Obituary for Thomas A. Pierce 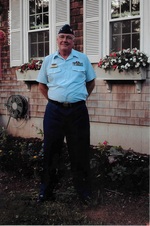 Clinton-Thomas A. Pierce, 78, passed away peacefully on Thursday, December 13, 2018 at the Odd Fellows Home in Worcester. He is pre-deceased by his first wife, Shirley (McGinnis) Pierce. He is survived by his loving wife of 13 years, Carol (Lawrence) Pierce; his two children, Thomas A. Pierce, Jr. of Leominster; and Jennifer Lord of Clinton; two grandchildren, Cameron Pierce and Jessica Pierce, both of Leominster; his sister, Karen Gautreau & husband Robert of Baldwinville; sister-in-law Linda Pierce of Hubbardston; brother-in-law Lionel Parent of Clinton; nieces, nephews, extended family, notably Thomas Beals & wife Cindy of Northborough; Janet Conely & husband Douglas of Oxford; and Scott Beals & wife Valerie of Webster; nieces, nephews, and many dear friends. He is pre-deceased by his brother Winston Pierce, sister-in-law Ruth Gilmour & her husband William, and sister-in-law Carol Parent.
Thomas was born in Gardner to the late Chester & Arline (Hill) Pierce. He attended local schools and studied the printing trade at Worcester Technical High School. Tom enlisted in the US Coast Guard and proudly served from 1959-1965, and later joined the Coast Guard Auxiliary, serving as Commander of Flotilla 1305 from 1977-1989. In civilian life, he worked for the Colonial Press in Clinton and later joined Nypro, Inc., from where he retired after 32 years as an automation technician. He held membership with the Clinton Turn Verein, the Eastham Elks Lodge, and the Straw Hollow Engine Club. An avid outdoorsman, hunter and fisherman, Tom was a member of the 8 Point Sportsman’s Club. He loved his years on Cape Cod and time on the ocean, but above all, he was a dedicated family man, loving husband, father, and grandfather. Calling hours will be held on Monday, December 17, 2018 from 5 until 7PM in the Philbin-Comeau Funeral Home, 176 Water St., Clinton. A Funeral Service will be celebrated at 10AM on Tuesday, December 18, 2018 at Hope Chapel, 35 Chocksett Road, Sterling. Burial will later be held at Woodlawn Cemetery in Clinton. Memorial contributions may be made in memory of Thomas A. Pierce to: Wreaths Across America, www.wreathsacrossamerica.org
Online condolences may be placed at www.philbincomeaufh.com

US Coast Guard
The insignias listed here may be subject to copyright and / or trademarked. Those copyrights and trademarks are owned by the respective organizations.
Printable
Share on Facebook
Contact Us