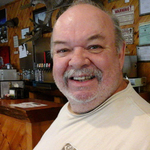 Lancaster-Paul A. Cooper, 64, passed away peacefully on Thursday, May 10, 2018 at River Terrace Healthcare in Lancaster. He is survived by his siblings; Maureen O’Connor of Clinton; Judy Cooper of Gardner; Linda Kerber-Bothur of CT; Charlene Posson of West Boylston; and Douglas Cooper of Worcester; 47 nieces and nephews, 138 great-nieces and nephews, extended family, and many dear friends. He is pre-deceased by siblings, Sandra Wilson, Carol Vosburg, Joyce Odum, Jerry, Robert, David, and Donald Cooper.
Paul was born in Clinton to the late Malcolm and Agnes (Erickson) Cooper. He graduated from the Clinton High School, Class of 1971, where he went two seasons without a loss as the standout goalie for the hockey team, then sponsored by the W.M. Reisner Corp. Paul continued studies in carpentry at Worcester Boy’s Trade School and began his lifelong career in roofing, working with Tilo Roofing and Elmo Garofoli for many years. Paul later worked as a welder for Vulcan Industries, and E. Nova Company before retiring as a truck driver from the Keebler Company in Northborough. An avid outdoorsman and member of the Holden Sportsman’s Club, Paul was a talented hunter and fisherman. Above all, he was a devoted uncle to his nieces and nephews and will be lovingly missed by family and friends. A Graveside Service will be celebrated on Friday, May 18, 2018 at 12pm in Woodlawn Cemetery, Clinton, under the direction of the Philbin-Comeau Funeral Home, 176 Water St., Clinton. Online condolences may be placed at www.philbincomeaufh.com