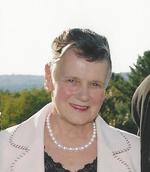 Clinton-Joanne C. (Turcotte) O’Malley, 83, passed away peacefully surrounded by family on Monday, June 18, 2018 at Knollwood Nursing Center in Worcester.  She is survived by her children & their spouses, Mary E. Kittredge; Kevin J. O’Malley and companion Beth Levasseur; Kathleen Kane & companion Ronnie Boucher; Maureen Morin & Robert, all of Clinton; John O’Malley & Karen; Peggy Kennedy & Joseph, all of Lancaster; Heidi Busby & Aaron of Alexandria, VA; step-children, Judy Regonini & Jack of West Boylston; Paula Bakun & David of Sterling; William O’Malley & companion Ingrid Soto of Clinton; Joy Pauquet & Pete of Haines, AK; daughter-in-law Patricia Cuddy O’Malley of Proctor, VT. She leaves her sister and best friend, Margaret “Peggy” Flaherty; sister-in-law Roseanne Lamarche; 23 grandchildren, 23 great-grandchildren, nieces, nephews, cousins, and many dear friends.  She is pre-deceased by her husband William P. “Wheezer” O’Malley; son, Patrick H. Kittredge; step-son, Michael T. O’Malley; grandson, Brian J. Erwin, great-grandson, Patrick Kane Gaw, her brother, John “Jack” Turcotte, and her beloved yellow lab, Siddie.
Joanne was born in Clinton to the late John & Mary (Keiser) Turcotte.  She attended local schools and graduated from Worcester Girls Trade School. Joanne devoted herself to raising her children and grandchildren and didn’t have time left over for much else.  She was the quintessential homemaker, talented in cooking, baking, sewing and knitting. A devoted child caretaker, she babysat for her grandchildren and great-grandchildren for decades and attended all of their sporting events and activities. Joanne was a woman of great faith and devout member of St. John the Guardian of Our Lady Parish in Clinton. Joanne and Wheezer could clear any dance floor with their talents, leaving others to only watch in awe. In addition to dancing, her next greatest enjoyment was cheering for the Boston Red Sox as a passionate, dedicated, life-long fan. Above all, Joanne was a devoted matriarch who led by example and who will be forever missed by all who loved her. Joanne’s family is grateful to the doctors, nurses and staff at Knollwood Nursing Center for their care, compassion, and friendship. Funeral services are to be held on Saturday, June 23, 2018 from the Philbin-Comeau Funeral Home, 176 Water St., Clinton, with a Mass of Christian Burial to be celebrated at 10AM in St. John the Evangelist Church, 80 Union St., Clinton, and burial to follow in St. John’s Cemetery, Lancaster.  Calling hours will be held in the funeral home from 4 until 7PM on Friday, June 22, 2018. Memorial contributions may be made in memory of Joanne O’Malley to: TEARS Foundation, 19 Belleview Ave., Marlborough, MA 01752, or to Knollwood Nursing Center, Employee Appreciation Fund, 87 Briarwood Circle, Worcester, MA 01606. Online condolences may be placed at www.philbincomeaufh.com
Printable
Share on Facebook
Contact Us