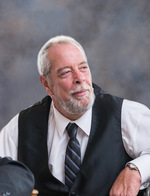 Lancaster— James E. “Jim” Steere, 57, passed away peacefully at home surrounded by family and friends on Wednesday, October 3, 2018.  He is survived by his beloved wife of 33 years, Genevieve (Robichaud) Steere; his children, Luke J. Steere of Marlborough; Peter J. Steere & wife Laura O’Neil; and James E. Steere, Jr., all of Lancaster; siblings & spouses, Jean McNary & Bill of East Dennis; Joanne Steere of Wrentham; Joyce Carter & Phil of Leominster; John P. Steere IV, Janice Steere, and Jeff Steere, all of Hudson; dear nephew Andrew Sherwood of CA; nieces, nephews, cousins, and many dear friends.  He is pre-deceased by his parents, John P. Steere III and Rita (Petersen) Steere, and sister-in-law, Michele Steere.
Jim was raised and educated in Hudson and graduated from Assabet Valley Regional High School, Class of 1979.  He then entered the family business and alongside his brother Jeff continuously owned and operated Steere Contracting Corporation in Hudson.  He humbly prided himself on honesty and a fair day’s work, and he could fix anything, notably his most recent project: restoring a 1969 Chevy Impala.  Jim’s Sundays were for his family, his well-being, and his recliner, the place to practice devotion to NASCAR and Western movies, listen to Bob Dylan and Jimi Hendrix, and have conversation over iced coffee. He was most happy in the company of family and friends.  Funeral services are to be held on Tuesday, October 9, 2018, from the Philbin-Comeau Funeral Home, 176 Water St., Clinton, with a Mass of Christian Burial to be celebrated at 10AM in St. John the Evangelist Church, 80 Union St., Clinton. Burial will take place at a later date.  Calling hours will be held in the funeral home on Monday, October 8, 2018, from 4 until 7PM. Memorial contributions may be made in memory of James E. Steere to: The American Diabetes Association, 260 Cochituate Rd. #200, Framingham, MA 01701; or a charity of your choice.  Online condolences may be placed at www.philbincomeaufh.com