The lighting of a Memorial Candle not only provides a gesture of sympathy and support to the immediate family during their time of need but also provides the gift of extending the Book of Memories for future generations. 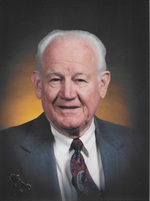 Lancaster-J. Houston Merriman, 94, passed away peacefully on Thursday, November 8, 2018. He is survived by his beloved wife of 62 years, Margarita L. (Dietel) Merriman; their children and spouses, Harold Merriman & Saundra of Waynesville, OH; and Merri Lynn Braman & David of Lancaster; three grandchildren, Aaron James, Julianne Pictou, and Justin Merriman; siblings, Ima Mae Green, Lorraine Miller, Betty Faye Haskew, Charles Merriman, and William Thural Merriman, numerous nieces, nephews, and many dear friends. He is pre-deceased by two sisters, Mary Louise Davis and Dorothy Wilson.
Houston was born in Monroeville, Alabama, the eldest of eight children born to John & Gladdene (Blanton) Merriman. He was educated at Collegedale Academy and continued studies at Southern Missionary College before enjoying his lifelong career in sales as a literature evangelist. Following marriage, he and Margarita accepted positions with Atlantic Union College and raised their family in Lancaster. Houston later worked as a sales representative for Eusey Press until retirement, when he and Margarita established, owned and operated Atlantic Funding. Above all, he was a man of great faith and a devout member of the College Church of Seventh-day Adventists. He held membership with Business Networking International, exercised with friends at Orchard Hills Athletic Club, and remained a dedicated fan of the Boston Red Sox. He will be remembered as a loving husband, father, grandfather, brother, uncle, and friend. A Funeral Service will be held at 10AM on Wednesday, November 14, 2018 at the College Church of Seventh-day Adventists, 337 Main St., South Lancaster, with burial to follow in Eastwood Cemetery. Calling hours will be held on Tuesday, November 13, 2018 from 5 until 7PM in the Philbin-Comeau Funeral Home, 176 Water St., Clinton. Online condolences may be placed at www.philbincomeaufh.com