In Memory of
Frederick R.
Wheeler
1928 - 2018
Click above to light a memorial candle.
Memorial Candle Tribute From
Philbin-Comeau Funeral Home
"We are honored to provide this Book of Memories to the family."
View full message >>>
Memorial Candle Tribute From
Jennifer Holder,Gallagher
"♡♡Always in my heart... Freddy and Ruthie ♡♡"
View full message >>>
Send Flowers
Plant a Tree In Memory of Your Loved One
Click Here
Menu 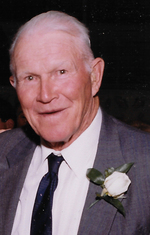 Berlin-Frederick R. Wheeler, 90, passed away peacefully at home on Friday, March 9, 2018. He is preceded in death by his beloved wife of 53 years, Ruth (Bridges) Wheeler. He is survived by his children & their spouses, Philip & Carolyn Wheeler of Wakefield, NH; Faye & Joseph Brennion of Berlin; Susan & Matthew Nolan of Waltham; Buddy & Linda Wheeler of Berlin; his brother Roger E. Wheeler of Berlin; grandchildren & their spouses, Ginny & Gregory Halfpenny, PJ & Debbie Wheeler, Joseph & Kristen Brennion, Becky & John Coomey, Christopher & Kimberly Brennion, Louis Cimorelli, Shane & Lynette Wheeler, Lauren & Bobby Fillios; 13 great-grandchildren, numerous nieces, nephews, cousins, extended family and friends. He is pre-deceased by his granddaughter Erin Lee Wheeler and his sister Norma Andrews.
Fred was born in Hudson to the late Roland & Freda (Stone) Wheeler. Before even graduating from the Hudson High School, Class of 1945, Fred had begun his life long career as a dairy farmer. He took great pride in successfully owning and operating his family business, Balance Rock Farm on Highland Street in Berlin for the past 75 years. He raised countless dairy cows, held membership with the MA Cooperative Milk Producers Federation, Farm Bureau, Milk Producers Services, Inc., and Berlin Grange. Fred also served his community as a member of the Berlin Special Police Force and the Berlin Board of Trade. He was a devoted husband, father, grandfather, great-grandfather, brother, uncle, and friend. Funeral services with burial will be held privately in North Cemetery, Berlin, under the direction of the Philbin-Comeau Funeral Home, 176 Water St., Clinton. Memorial contributions may be made in memory of Frederick R. Wheeler to: XIX Carter, 19 Carter St., Berlin, MA 01503. Online condolences may be placed at www.philbincomeaufh.com