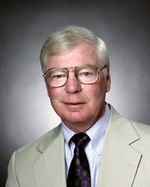 Clinton-Coach Bernard F. Gaughan, 80, passed away at home on Friday, November 9, 2018 after a brief battle with cancer.  He is survived by his beloved wife of 57 years, Anne (Zumhagen) Gaughan; their children and spouses, Michael B. Gaughan & Margaret of Leominster; Patrick D. Gaughan & Margaret of Littleton, NH; Peter F. Gaughan & Julia of Freeport, FL; and Nancy Peto & Jeffrey of Sterling; 7 grandchildren, Amanda, Daniel, Jack, Andrew, Bayly, Allison, and Jillian.  He leaves his siblings and their spouses; David Gaughan & Jo-Ann of Worcester; Mary Pat Spear & Robert of Clinton; and Kathryn Morin & John of Ft. Pierce, FL; and generations of nieces, nephews, cousins, and dear friends.  He is predeceased by his brother Charles L. Gaughan.
Bernie was born in Clinton to the late Melvin & Rita (O’Connell) Gaughan.  A graduate of Clinton High School Class of 1955, he excelled in athletics as a member of the varsity football team and as co-captain of the varsity baseball team.  He enlisted and proudly served our nation in the US Army Company C 801st Engineering Battalion.  Bernie graduated from the University of Tampa with a Bachelors Degree in Physical Education and went on to follow his calling in life as an educator and coach. He was employed by the Josephine Wilbur School in Little Compton, RI from 1963 to 1965. In 1965 he began a thirty-two year teaching and coaching career as the Director of Physical Education for Clinton High School, coaching numerous sports, memorable teams and athletes, notably the 1993 State Champion Division 2 Clinton High School Baseball team, CHS girls basketball, boys basketball, football, cross country, and track and field. As a respected member of the Assumption College football coaching staff for more than 20 years, Coach Gaughan led the Greyhounds as Defensive Coordinator from 1973-1983 and as Head Coach from 1983-1995.  After retiring from teaching in 1997, he culminated a legendary 55-year career on the sidelines with coaching his granddaughters and the Chocksett Middle School girls basketball team. For his achievements, Coach Gaughan received numerous awards of recognition and was honored with induction into the Assumption College Athletics Hall of Fame and the Massachusetts Baseball Coaches Association Hall of Fame. In addition, Bernie served as the long-time Director of the Clinton Parks and Recreation Department Summer Program. He was a man of great faith and life member of St. John the Guardian of Our Lady Parish in Clinton. Bernie enjoyed golfing, gardening, boating, fishing, attending family sporting events, and cheering for his protégé, Coach Brian Kelly, and Notre Dame football.  He spent his summers in Kennebunk, Maine and was known to raise a pint or two in celebration of his Irish heritage. Calling hours will be held on Thursday, November 15, 2018 from 4 until 8PM in the Philbin-Comeau Funeral Home, 176 Water St., Clinton. A Mass of Christian Burial will be celebrated at 10AM on Friday, November 16, 2018 at St. John the Evangelist Church, 80 Union St., Clinton, with burial to follow in St. John’s Cemetery, Lancaster.  Memorial contributions may be made to the Clinton Athletic Fund, In memory of Bernard Gaughan, c/o Clinton High School, 200 West Boylston St., Clinton, MA 01510. Online condolences may be placed at www.philbincomeaufh.com

US Army
The insignias listed here may be subject to copyright and / or trademarked. Those copyrights and trademarks are owned by the respective organizations.
Printable
Share on Facebook
Contact Us