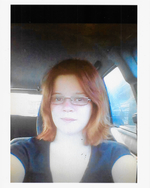 Clinton-Casey Lou (Cuglietta) Hays, 26, passed away on Thursday, March 29, 2018 at Massachusetts General Hospital following complications from a surgical procedure. She is reunited with her mother Stacie Anne (Jones) Cuglietta, who died in 2014. She is survived by her fiancé Peter Milonopoulos of Clinton; her father Anthony J. Cuglietta, Jr. & wife Lisa of Ona, FL; maternal grandparents, Sandra Jean (Kingsbury) Jones & William Clements of Dennis; and Robert J. Jones of Lancaster; paternal grandmother Maria Cuglietta of FL; aunts & uncles, Randy Jones & Michelle of Lancaster; Steven Jones of Sterling; Christie (Sulkoski) Coleman & Kevin of Bolton; great-uncle William Kingsbury & wife Karen of RI; numerous cousins, and many dear friends.
Casey was raised and educated in Littleton, before relocating with her family to Port Charlotte, FL, and graduating from the Port Charlotte High School. She was employed in retail for several years before returning to Clinton and working at the Over Easy Café in Sterling. During her youth, Casey volunteered summers at the Cape Cod Museum of Natural History and was active with gymnastics, horseback riding, karate, and ballet. She loved animals and was a compassionate, caring, kind, and loyal friend who would do anything for someone in need. Casey will be forever missed and remembered lovingly by her family and friends. A Funeral Service will be celebrated at 10AM on Thursday, April 5, 2018 in the Philbin-Comeau Funeral Home, 176 Water St., Clinton, with burial to follow in Eastwood Cemetery, Lancaster. Calling hours will be held from 5 until 7PM on Wednesday, April 4, 2018 in the funeral home. Memorial contributions may be made in memory of Casey Lou Hays to: Neurofibramatosis Northeast, 9 Bedford St., Burlington, MA 01803. Online condolences may be placed at www.philbincomeaufh.com