In Memory of
Alan Kenwood
Jones
1946 - 2018
Click above to light a memorial candle.
Memorial Candle Tribute From
Philbin-Comeau Funeral Home
"We are honored to provide this Book of Memories to the family."
View full message >>>
Send Flowers
Plant a Tree In Memory of Your Loved One
Click Here
Menu 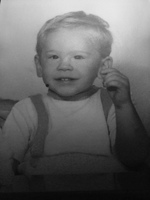 East Brookfield-Alan Kenwood Jones, 71, who lived most of his life at his family’s home in East Brookfield, Massachusetts, died on July 26, 2018 at UMASS Medical Center, Worcester after an acute illness. Alan devoured and almost memorized each issue of Popular Mechanics and Consumer Reports and prized his Gravely tractor. He knew everything about classic movies, his favorite being “Citizen Kane,” and watched television shows from the 1950s through the 1970s exclusively, favoring comedies.
Due, no doubt, to his deep roots in New England, he drank milk with every meal and always had cheddar cheese with his apple pie. Alan loved animals, and left spiders undisturbed in their webs. At one time, he was active in the East Brookfield Baptist Church, where he was sexton, sang in the choir, and helped lead youth groups. Alan graduated from David Prouty High School in 1965.
Diagnosed with schizophrenia in 1983, he endured psychotic episodes amid periods of wellness before falling into a catatonic state six years ago. Alan was devotedly cared for at home by his parents, F. Kenwood and Beverly Jones until their deaths. He died a day after what would have been his Aunt Betty’s one hundred and second birthday, appropriately enough as she had advocated for Alan since his birth.
Alan leaves two brothers, Robert of Worcester, and Richard of Bolton, as well as an aunt, Lois Austin of Worcester, and many cousins. A private service for family and close friends will be held in September. Funeral arrangements are entrusted to the care of Philbin-Comeau Funeral Home, 176 Water St., Clinton. www.philbincomeaufh.com